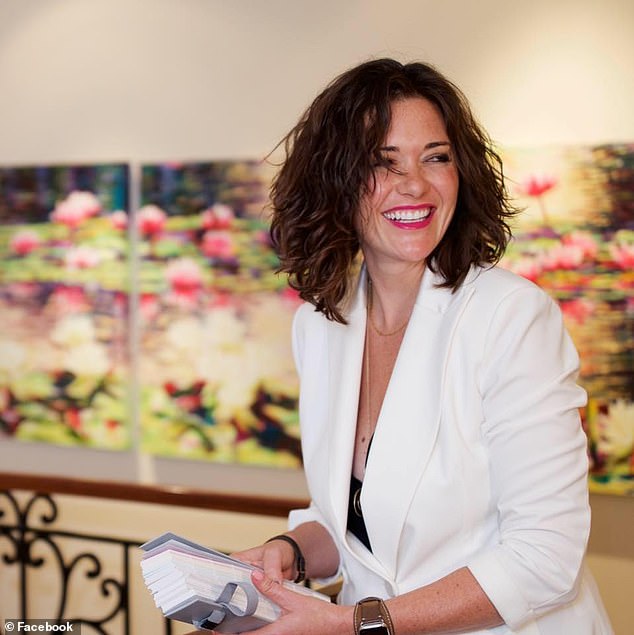 
A San Diego interior designer is on trial for murdering her butterfly farm-owning ex-stepdad after catching him using a stolen nude photo of her as his screensaver.

Janks, who runs a successful interior design firm, was described by prosecutors as being ‘beyond freaked out’ after she found multiple naked images of herself in Merriman’s home, one of which he was even using as a computer screensaver.

Records show that Janks’ mother divorced Merriman in 2008 after multiple instances of domestic abuse, although Janks and Merriman maintained a relationship.

Deputy District Attorney Jorge Del Portillo said: ‘This was no accident. This was murder by design.’ In court, it was alleged that Janks suffocated Merriman with a plastic bag.

However, Janks’ attorney, Marc Carlos, says that Thomas Merriman, 64, the co-founder of a popular butterfly farm in Encinitas, died due to ill health and his own cocktail of sleeping pills. His body was found under a pile of trash outside of his home on January 2.

She has pleaded not guilty to murder. If convicted, Janks could face life in prison.

Jade Janks, who operated an interior design business in San Diego, allegedly drugged, suffocated and strangled her stepdad after discovering he was in possession of nude photos of her

Carlos said: ‘The medical examiner will not tell you it was strangulation. The science does not support strangulation.’ The official cause of death was acute intoxication, reports the San Diego Union Tribune.

The attorney went on to say accuse Merriman of being an alcoholic who was addicted to pills.

Merriman’s body was found under trash bags by police outside of his home in Solano Beach. Officers had gone to the home to conduct a welfare check.

Prosecutors say that Janks told others that she killed Merriman. Despite the fact that her mother had long since divorced Merriman, the pair were still close.

Thomas Merriman, pictured here, was recovering from injuries sustained after a fall when he died

Merriman was returning home on New Year’s Eve after he was hospitalized due to a fall. Janks had picked him from a care facility. Her lawyer said that when he left the facility, he was given a supply of various pills.

A few days earlier, Janks was cleaning in Merriman’s apartment when she bumped into his computer, waking it. That’s when she saw a nude photo that she had taken years previously as his screensaver.

The prosecutor said that the discovery of the pics left her ‘distraught’ and ‘disturbed to the core.’

A former friend of Janks’, Sarah Jacobs, testified that the suspect told her about the photo but said that didn’t indicate that Merriman would face any repercussions. Jacobs described the photo as showing Janks ‘scantily clad.’

Her lawyers say that the pictures were taken consensually with a boyfriend years previously. It’s not clear how Merriman obtained the photos.

From there, prosecutors allege, Janks began hatching a plot to kill her stepdad.

A few days before he was released from the hospital, Janks was cleaning in Merriman’s apartment when she bumped into his computer, waking it. That’s when she saw a nude photo that she had taken years previously as his screensaver

In court this week, prosecutors showed messages that Janks sent to friends, one read: ‘I just dosed the hell out of him. Stopping for whiskey at Dixieland to stall. LMK’

‘I just dosed the hell out of him. Stopping for whiskey at Dixieland to stall. LMK.’

‘I can’t carry him alone and I can’t keep a kicking body in my trunk.’

‘I am about to club him on the head as he is waking up.’

‘I’m not strong enough. He is very aware now and I am on my own.’

According to the Union Tribune, the prosecutor called one of those contacted a ‘fixer-of-sorts.’

A friend who originally answered her call for help, Adam Siplyak, shown here, later said that he couldn’t help and went to the police to report Janks

Janks’ lawyers say that the pictures were taken consensually with a boyfriend years previously. It’s not clear how Merriman obtained the photos

A friend who did answer her call for help, Adam Siplyak, went to the home on New Year’s Eve but said he would not help her to get rid of the body. The following day, he went to the police to report what happened.

Janks originally told him that she needed help getting Merriman home because he was high on pills. However, when Siplyak showed up, she confessed what happened.

The lead detective in the case, Lisa Brannan said in court this week: ‘Ms. Janks told Mr. Siplyak that she killed her stepfather and she said, ‘I suffocated him with a bag and I choked him.” She also said that she gave him a bunch of drugs.’

After refusing to help her, Siplyak said: ‘I have a son to raise.’

The pair then had a cigarette and kissed before he left. The suspect’s lawyer said that Siplyak is a recovering drug addict who has a crush on Janks.

The lawyer conceded that the pair have cuddled and kissed in the past but have not had a sexual relationship.

The arresting officer later testified, San Diego Sheriff’s Office Matthew Gibson, he said that Janks was calm when she was arrested.

The arresting officer later testified, San Diego Sheriff’s Office Matthew Gibson, he said that Janks was calm when she was arrested

Toxicologist Raymond Gary was next to testify, he said that Merriman had high levels of the sleeping drug zolpidem in his system

Toxicologist Raymond Gary was next to testify, he said that Merriman had high levels of the sleeping drug zolpidem in his system.

Since her arrest, Janks has been free on a $1 million bail albeit with a GPS anklet. At the time her bail was set, prosecutors argued that the suspect has the financial resources to flee and connections in South Africa.

She owner of a start-up interior design business, Jank Janks Interiors. On the website for the company, she writes: ‘Your home is a reflection of you and Jade will help you express your personal style through a process easy and fun!’

A bio also says: ‘You can count on Jade to hold your hand and make your project a fun one!’ Janks also says that she got her start in interior design through working for her dad’s kitchen design company.

Janks, shown here with her mother, Jeni, was freed earlier this year on a $1 million bail

Merriman and Janks’ mother Jeni married in July 1995. The couple had a son together, Cash. The victim had another daughter from a previous relationship.

Online records show that there were multiple instances of domestic abuse in the marriage between 2002 and 2008. The couple filed for divorce on multiple occasions during that time, finally doing so in 2008.

Merriman founded the Butterfly Farm, a nonprofit, in 2013 alongside his friend Pat Flanagan. He told NBC San Diego in January: ‘Tom was just an all-around good guy. He loved being outdoors. He was very handy. He cared and he really gave a lot to the community.’

Bizarrely, in 2019 a Butterfly Farm employee, Sabrina Lukosky, was murdered by her boyfriend, Henry Simon Cowen, in their home. Cowen was sentenced to life in prison for the crime in November 2021.

Flanagan told ABC San Diego  in 2021: ‘The irony is not lost here. Somebody came in and did a donation toward Sabrina, ironically, on Friday which is the same day apparently Tom’s body was found.’