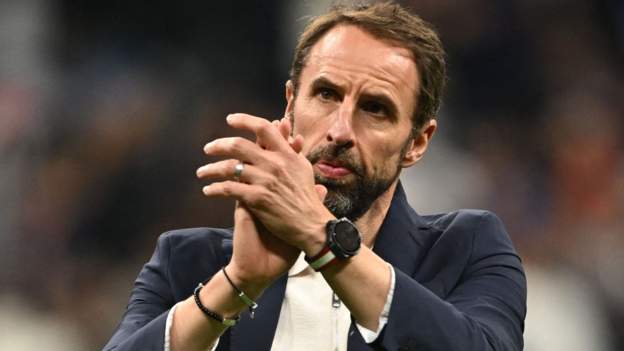 
England manager Gareth Southgate says he will “review and reflect” on his side’s World Cup quarter-final exit with the Football Association before making a decision on his future.

After the 2-1 loss to France, Southgate said: “These tournaments take a lot out of you and I need time to reflect.

“We’ve done that after every tournament and that’s the right thing to do.”

Former England internationals Gary Neville and Ian Wright, along with ex-Republic of Ireland captain Roy Keane, unanimously agreed they would like to see Southgate continue.

Having led England to the 2018 World Cup semi-finals and the Euro 2020 final, Southgate was unable to reach the last four of a major tournament again following the agonising defeat by France in Qatar.

“I’m so proud of what the players have done, not just tonight but through the whole tournament,” added Southgate.

“I think the team has taken a real step forward in all areas.”

England produced a fine performance against the reigning world champions, but could not make their superiority at key stages count and were duly punished in the last-eight tie.

Captain Harry Kane equalised with a penalty for 1-1, but missed the chance to level again from the spot with just six minutes of normal time remaining after Olivier Giroud had netted a second for France.

“Everybody can see the team has progressed through this tournament,” added Southgate, who was promoted from his role as England Under-21 boss six years ago.

“I think the performances have been a very good level, [including] against one of the very best teams in the world in France.

“We showed how close we are to that level, that we have some young players who announced themselves on a global stage and a spirit which we hoped would take us further.”

Match-winner Giroud also spoke positively about England’s performances in Qatar, saying: “We knew the potential of this young English generation. They’ve got it all.”

Southgate began his reign as England manager in October 2016, winning 49 of his 81 games in charge and the loss to France being his 14th.

After a 2-1 defeat to Croatia in the last four of the 2018 World Cup in Russia was followed by another by Italy – on penalties – in the Euro 2020 final, questions were asked about Southgate’s ability to get the most out of his talented squad.

Further concerns were raised during a poor Nations League campaign earlier this year, particularly after a humiliating 4-0 home thrashing by Hungary, where England fans chanted, ‘You don’t know what you’re doing’ at the manager’.

England have since recovered to reach the World Cup quarter-finals in Qatar, with Southgate earning credit for the tactical decisions that led to a 3-0 win against Senegal in the last 16.

But he will come under more scrutiny following another disappointing exit, when many fans felt they had a squad equipped to win the trophy.

“I would love Gareth to stay on for another two years and beyond that, whether as the coach or in a role in the FA designing the future,” said former Manchester United captain Neville in his role as an ITV pundit.

“England are in a pretty good place, let’s be clear about that. We’ve gone out of tournaments in disgrace and wondered what the hell the future is.

“We have a great future and he is a big part of that.”

“We played with belief and we are only 18 months away from the Euros. This group will stay together and build,” added former Arsenal defender Keown.

Ex-Newcastle midfielder Jenas said: “I don’t see any regrets, we grew into the competition and today was that coming-of-age game.

“In terms of performance of the manager and the players, I have no qualms.”

Former England striker Gary Lineker remained upbeat about the team’s future and said there was “little shame” in losing to holders France.