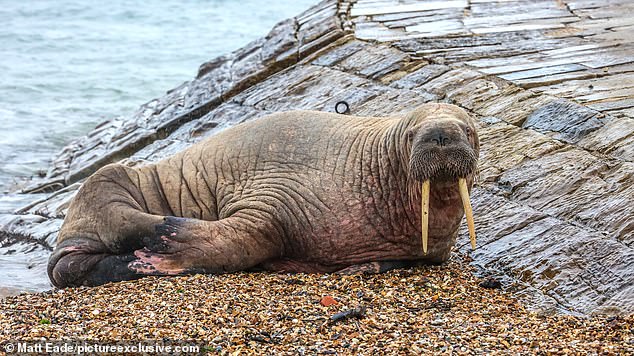 
Taking a sea-esta! ‘Thor’ the walrus is seen taking a quick nap on a British beach after travelling from Europe

By Joseph Laws For Mailonline

A large walrus was today found resting on a British beach in what is a rare UK sighting.

The marine mammal – nicknamed ‘Thor’ – was discovered resting on the shoreline of the Solent on the south coast after travelling from Europe.

Fisherman Darren Mckell was out with his wife Caroline and son Luke in the early hours when they found the ‘big lump’ at Calshot beach, Hants, on Sunday morning.

The fisherman and his family, from nearby Holbury, said he thought it was a seal.

As Thor rests and swims by the beach, members of the public have been warned to stay away as Walruses are protected from disturbance under UK law.

British Divers Marine Life Rescue (BDLMR) are at the scene alongside coastguard, with medics checking on the large mammal.

Walruses tend to live in and around the Arctic circle and it is rare for them to come this far south, however Thor was last spotted in the Netherlands on November 6 and has been travelling along the coast of France as far as Brittany in the last few weeks

Walruses travel long distances and have rest stops to recover and regain energy before moving on again.

Mr Mckell said: “It was unbelievable and such a shock.

“I thought it was a seal at first but as I got closer I saw it was huge and it was a walrus.

“It was absolutely amazing to see something like that, especially in these waters. I hadn’t realised how rare it was to see a walrus here.

“It was lovely to see but something you’d never expect. I’ve never seen a walrus in the wild as they don’t normally live in these areas.

“Seeing the walrus was a double-take moment.”

Last year, two walruses visited the UK – Wally, who came to south Wales and the Isles of Scilly and Freya, who visited Northumberland and Shetland.

A spokesman from the BDMLR said: “Key advice is being issued to everyone to give the walrus a very wide berth to avoid disturbing it.

“They travel long distances and have rest stops to recover and regain energy before moving on again.

“Every time it is disturbed by people being too close or noisy will impact it’s chances of survival. Walruses are protected from disturbance under UK law.

“Of course we do not know how long Thor will be around the UK, but while he/she is here we ask everyone to behave sensibly and responsibly for their safety as well as that of the walrus to avoid a worst case scenario occurring.”