Travelling Suitcase | 36 Hours in Philadelphia, the US 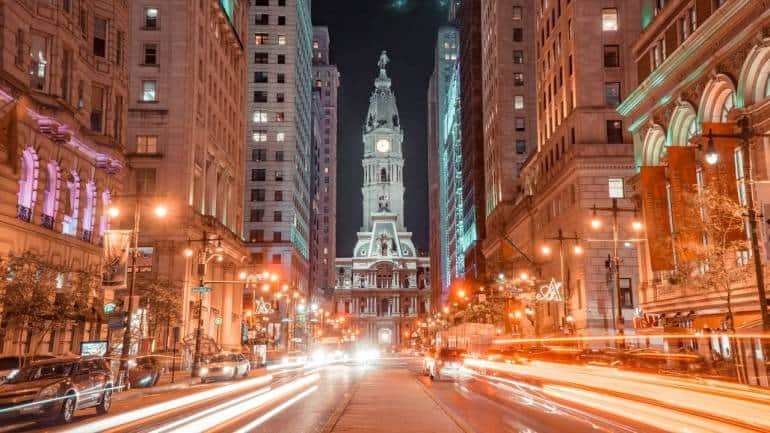 If you’re travelling to New York or Washington DC on a work or leisure trip and wish to get away for a short weekend break that packs in a bit of everything, then the beautiful city of Philadelphia in Pennsylvania makes for the perfect choice. Strategically located just about 2 hours away by road from either city, Philly, as it’s lovingly nicknamed, not only boasts a stunning skyline — with a mix of modern skyscrapers and classic European architecture, but it also features important historical landmarks, one of America’s busiest art landscapes, a vibrant food scene, and tax-free shopping! So, if you’ve only a day and half to spare, take cues from the suggested itinerary below and make the most of the City of Brotherly Love.

The newly created Museum of the American Revolution. (Photo: Dan Mall via Unsplash)

Given its role in the American Revolution and its status as the first capital of the United States, it is imperative to get a sense of the place and its history through its most visited landmarks. The birthplace of the United States, the UNESCO World Heritage site of Independence Hall is where the Declaration of Independence was signed and the US Constitution created. Across the street, stands the world’s most recognisable symbol of freedom, the Liberty Bell with its distinctive crack. The newly created Museum of the American Revolution features interactive displays and exhibits of the American War of Independence, including George Washington’s Revolutionary War Tent. In the heart of Center City is the world’s largest free-standing masonry building, the magnificent Philadelphia City Hall. Built in the ornate Second Empire style in 1894, it is topped with a 37 ft tall and 24,198 kg heavy bronze statue of city founder, William Penn. Next door is the John F. Kennedy Plaza, a public park that has been nicknamed LOVE Park after its most photographed inhabitant, the LOVE sculpture.

The city is conveniently walkable, but if you’re short on time, Philadelphia Trolley Works offers several sightseeing options—by the double-decker Big Bus, Victorian-style trolleys, or even horse-drawn carriages. The best bet is to arrive early in Philadelphia, get a 1 Day Big Bus Pass for $36, and spend the morning hopping on and off it at various landmarks as per your convenience and interest.

One of the nation’s oldest and largest public markets, the beloved Reading Terminal farmer’s market and food hall features over 70 family-owned vendors offering an astonishing variety of globally-inspired food, regional delicacies, fresh produce and groceries. Navigating through the maze of stalls and selecting what to eat and from where is as much a delight as it’s time consuming. Best option is to try some of the popular local foods—the iconic Philly cheesesteak (from Carmen’s, Spataro’s or By George!), hoagies (DiNic), soft pretzels (Miller’s Twist), whoopie pies (Flying Monkey) and shoofly pies (Beiler’s Bakery).

Once the most famous and expensive prison in the world, the now abandoned Eastern State Penitentiary stands as a haunting ruin that once held many of America’s most notorious criminals, including the legendary gangster Al Capone. His restored cell now forms one of the prime attractions here. The prison is noteworthy for its soaring, castle-like Gothic architecture and distinctive “wagon-wheel” floor plan, which was replicated by 300 prisons on four continents. The most interesting fact however, is that this was the first prison in the world where solitary confinement was introduced, as an experiment to reform criminals through strict isolation. The penitentiary is open for daytime audio and guided tours till 5 pm.

Immerse yourself in the interactive art world of Wonderspaces (2 hours)

Located in the premises of a shopping mall in Center City, Wonderspaces is a year-round art show that presents an evolving lineup of 16 extraordinary immersive, interactive installations. Among the works on display, the most engaging is Submergence by Squidshop—an installation of 8,064 hanging light points that visitors can walk through and which continually change colours and rhythm with music. The inflatable sculpture, Erupture by Nicole Banowetz depicts a surreal enlarged landscape of microscopic lifeforms; while Blooms by John Edmark is a series of 3D-printed sculptures that animate when spun under a strobe light.

Indulge in tax-free retail therapy in Center City (As long as you wish!)

There’s no better way to wrap up a day of explorations than with a round of shopping, especially when it comes tax free! Philadelphia benefits from Pennsylvania’s tax-free status on clothes and shoes, making the city a retail therapy heaven. Center City is lined with high street and luxury branded stores, while the Macy’s here occupies the historic 12-storey Wanamaker building, which was the first department store in Philadelphia when it opened in 1910. The newest shopping destination is Fashion District, spanning three blocks in the heart of downtown Philly, and housing numerous brands under one roof.

Shop till you drop and later stop by one of the many fine dining restaurants or buzzing pubs for dinner and drinks before calling it a night.

It is quite impossible to go anywhere in Philadelphia without being greeted by a vibrant mural gracing a wall. With over 4,000 murals painted across the city, Philly is often crowned the “Mural Capital of the World”. The force behind it is the Mural Arts Philadelphia project, which started as an anti-graffiti effort in 1984 and has today grown into America’s largest public art program. It offers several guided tours of the city’s stunning collection of murals, wherein you also learn about the artists, the subjects and the themes. The tours begin around 11 am, so there’s plenty of time for you to enjoy a leisurely breakfast beforehand.

Rocky Steps leading up to the Museum of Art, Philadelphia, the US. (Photo: Wikimedia Commons)

Located atop Fairmount hill, a short distance away from Center City, the spectacular Philadelphia Museum of Art is a must-visit for art lovers, with 200 galleries displaying over 2,40,000 artworks of European, American and Asian origins. Several special exhibitions are held here every year; among the ones currently on view, the “Matisse in the 1930s” exhibition offers a chance to discover a decade of French visual artist Henri Matisse’s most significant works in the 1930s.

Interestingly, art aside, the museum is more famous for the steps leading up to its east entrance. The Rocky Steps, as it’s popularly known, is a flight of 72 steps that featured in the 1976 Sylvester Stallone blockbuster, Rocky. Tourists throng the spot to mimic Rocky’s sprint up the stairs, and also click photos with the Rocky statue at the base.

Grab a Campo’s cheesesteak for lunch—and one for the road! (1.5 hours)

Have a cheesesteak or two at Campo’s, Philadelphia. (Photo: Wikimedia Commons)

You cannot possibly leave Philadelphia without savouring one last cheesesteak. The family-run Campo’s in Old City is a sort of Philly institution that has been serving some of the best cheesesteaks, hoagies and speciality sandwiches since 1947. With the softest, freshest breads, the juiciest meat and just the right amount of cheese, their traditional cheesesteaks — which also come in meat-free options — are clearly the best! Wash down one for lunch with a selection of local beer. Later, time permitting, stroll around the charming Old City neighbourhood, with its European-style row houses and cobbled streets. And if the craving gets working again, walk back to Campo’s and grab a Philly cheesesteak for the road!