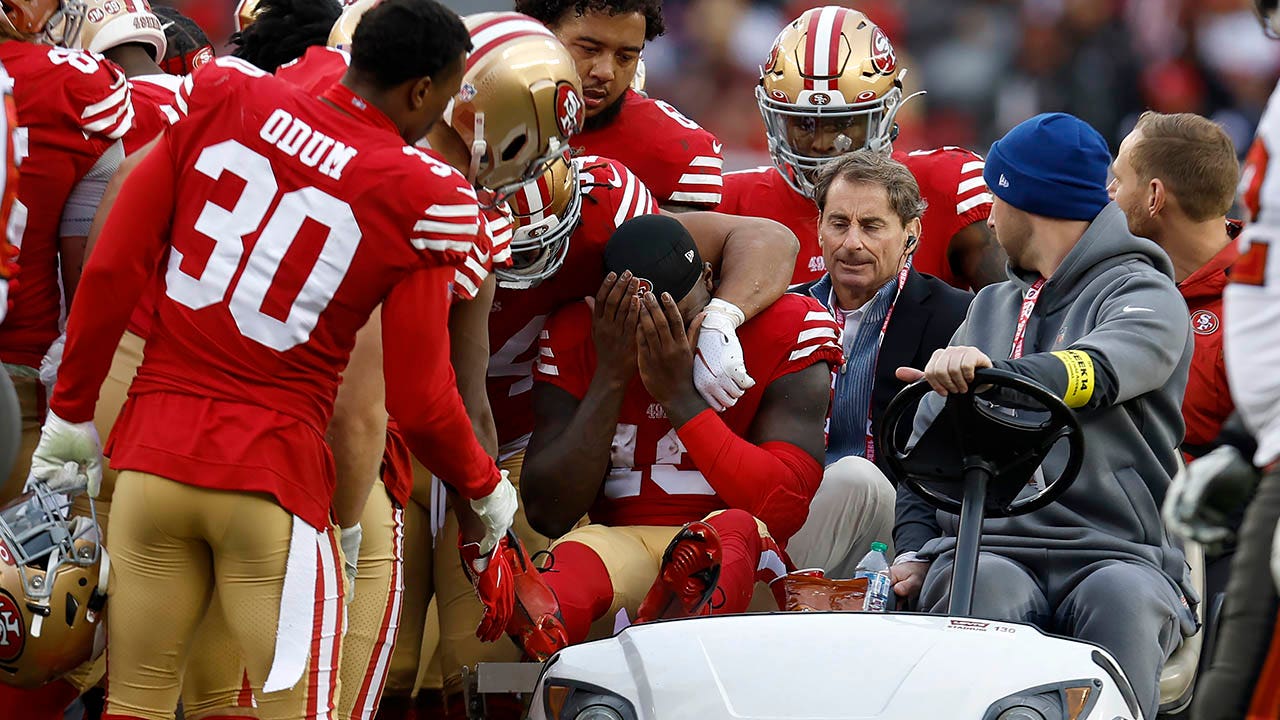 
San Francisco 49ers star Deebo Samuel appeared to avoid major injury when he was forced to leave Sunday’s game against the Tampa Bay Buccaneers on a cart.

It appeared at first Samuel had hurt his knee as he was holding onto it as the cart brought him back to the locker room. The 49ers later ruled him out with an ankle injury. After the team’s 35-7 win over the Buccaneers, head coach Kyle Shanahan provided a health update on the wide receiver.

San Francisco 49ers wide receiver Deebo Samuel is checked before being carted off the field during the first half against the Tampa Bay Buccaneers in Santa Clara, California, Sunday, Dec. 11, 2022.
(AP Photo/Tony Avelar)

Shanahan said Samuel didn’t break any bones and “most likely” suffered a high-ankle sprain – a painful injury that could keep him off the field for at least the rest of the regular season. But he could be back in time for the playoffs should the 49ers hold off the Seattle Seahawks in the NFC West.

“It was definitely concerning on the field,” 49ers defensive end Nick Bosa said. “It looked pretty bad. I hope that he’s all right. He’s tough as hell. He tried to walk off. I’m just hoping for the best.”

Samuel got the ball on a running play with 5:10 remaining in the second quarter. Samuel’s knee appeared to buckle on a tackle as he fumbled the ball. The ball was recovered by Buccaneers linebacker Lavonte David, and it gave the Buccaneers good field position.

Unfortunately, Samuel looked really hurt. Medical personnel brought a cart out for Samuel, and he was whisked away to the locker room before being ruled out with an ankle injury.

He had four catches for 43 yards to go with 21 yards on the ground and a rushing touchdown. San Francisco was up 21-0 when he was taken off the field.

San Francisco 49ers wide receiver Deebo Samuel, middle, reacts as he is carted off the field during the first half on Sunday.
(AP Photo/Jed Jacobsohn)

Over the last few seasons, Samuel has become the jack of all trades for the 49ers. The 2019 second-round pick was set to get an even more elevated role as quarterback Brock Purdy took the reins from an injured Jimmy Garoppolo last week.