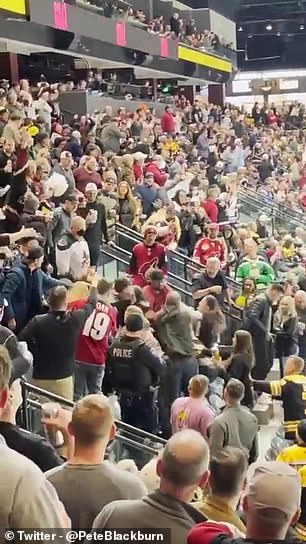 
Brutal fight breaks out between hockey fans in Arizona with one woman floored by a violent punch, before cops try to stop the beatdown… but one officer just watches on!

By Kate Mcgreavy For Dailymail.Com

A violent brawl broke out in the stands of a hockey game Friday night with footage of the shocking incident posted online.

A massive fight among spectators took place at the Mullett Arena, Arizona, during the Coyotes 4-3 win over the Boston Bruins in the NHL.

Several fans engaged in a shoving fight before swings and brutal punches were traded.

Some ended up tumbling over the seats while one man floored a woman with a hard blow.

The force of the shot sent her crashing down a few rows but she returned to her feet shortly after.

A police officer can be seen watching the melee before other cops rushed over to intervene.

An officer attempted to break up the scrap but he too was sent flying into the railings.

The altercation appeared to stop as more cops arrived on the scene.

One unidentified individual was arrested for aggravated assault, according to Arizona State University Police, as first reported by KTAR News.

While five unnamed people were cited and released for disorderly conduct following the incident.

Dailymail.com has reached out to Arizona State University Police for more information.

The Coyotes ended a 19-game losing streak to the Bruins after Lawson Crouse scored the decisive goal in the third period.