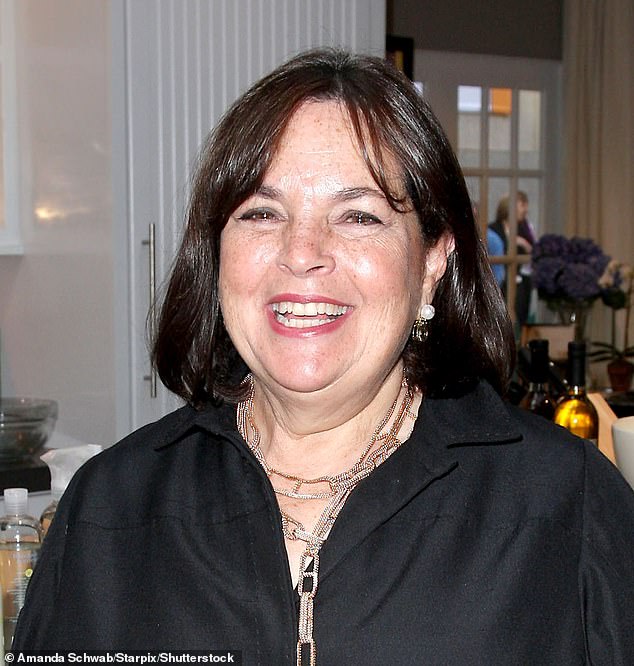 
The Barefoot Contessa may be all about avoiding shortcuts but ‘store bought is fine’ when it comes to one Trader Joe’s dessert she called ‘absolutely delicious.’

Food Network host Ina Garten, 74, during a recent segment with ‘TODAY‘ described the $7.99 French apple tart from the California-based grocer as delectable while discussing holiday traditions with the anchors.

‘When you’re hosting, you don’t want to be stuck in the kitchen the whole time,’ said ‘TODAY’ host Savannah Guthrie said.

‘No,’ Garten responded emphatically. ‘The other day I had some friends over and I had, I got an apple tarte from Trader Joe’s, I put it in the oven it was absolutely delicious,’ the Food Network host said.

Ina Garten, 74, during a recent ‘TODAY’ appearance said she found a Trader Joe’s dessert delectable and enjoyed cutting down her time in the kitchen

While the grocery chain’s stock may not have skyrocketed, the popularity of the seasonal item sure has as her millions of followers have flooded stores in search of the dessert.

According to the item’s description, it takes just a few minutes to warm up and the recipe used for this product was once served to the president of France.

‘Whether it’s the sweet or the savory side of Thanksgiving that piques your palate, our French Apple Tart will have you saying, More, s’il vous plaît!’ the item’s description reads.

‘To create this masterpiece of a Tart, our supplier takes a buttery apricot and apple filling (made with sweet Northern Spy apples and tart Granny Smiths), nestles it in a shortbread crust, tops it with a fan of even more sliced apples, and finishes it with a light, apricot glaze,’ the Trader Joe’s website reads.

Garten is famed for regularly cooking with ultra-expensive ingredients – and she once roasted a chateaubriand just to slice it up for sandwiches for a picnic for one of her shows.

The star also favors Poliane sourdough loafs, and regularly tells her rapt fans to ensure they buy a ‘really good’ version of a store-cupboard ingredient.

Garten is also famed for telling fans that if they can’t obtain an exotic ingredient, ‘store bought is fine.’

Many online jokers suggest that she makes the concession grudgingly, and it has generated countless memes.

Garten during the ‘TODAY’ segment also said she took the recommendation of Trader Joe’s to serve it with vanilla ice cream and ‘a drizzle of caramel’ that she had warmed up from a jar.

‘There was nothing to do and it was mine and it was personal,’ the food connoisseur said.

The recipe used for this Trader Joe’s item was once given to the president of France, according to the grocery’s website

Garten also said that sometimes when it comes to the holidays, a beautiful display to welcome guests and more time spent with loved ones is more important than an item being home-made.

The sentiments are a change of pace for the celeb chef who has just under four million followers on Instagram and owns upscale properties in the Hamptons and Paris.

She gained notoriety for her lavish dishes, cooking up popular foods ranging from steaks to cakes. This year, however, Garten changed up her tune after a ‘crazy’ time in lockdown during the COVID-19 pandemic.

Earlier this year, the chef released her new book ‘Go-To Dinners’ which was focused on easy, simple dinners for the family.

The celeb chef has been on a ‘simpler is better’ kick recently, even releasing her new book ‘Go-To Dinners’ which includes recipes for easy dinners

‘Cooking during the pandemic got pretty crazy, even for me, so I devised all kinds of ways to get dinner on the table with the least amount of stress,’ Garten said in an Instagram post in March.

‘Everybody’s really kind of struggling because everything seems so much harder,’ Garten told USA TODAY. ‘And we’re all kind of exhausted. So I just thought, the easier I can make recipes for people the happier they’ll be.’