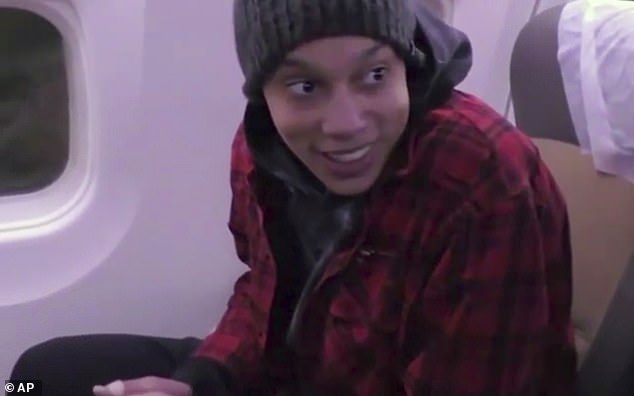 
WNBA player and recently returned US citizen Brittney Griner spent her flight home to the US talking with crew members and others on her flight.

According to Roger Carstens, the Special Presidential Envoy for Hostage Affairs, Griner was chatty on her long trip back from a prisoner exchange in the United Arab Emirates.

‘I have been in prison for 10 months now, listening to Russian. I want to talk,’ Griner said, recounted Carstens. He had told the two-time Olympic gold medalist that she should feel free to decompress on the flight home.

Carstens said instead Griner began talking to the other passengers on the plane.

‘She moved right past me and went to every member on that crew, looked them in the eyes, shook their hands and asked about them, got their names, making a personal connection with them.

‘It was really amazing,’ he said during an appearance on CNN’s State of the Union.

Brittney Griner is traded on an tarmac in the United Arab Emirates for Russian arms dealer Viktor Bout. Griner had been detained in Russia since Februrary

Griner was traded for famed Russian arms deal Viktor Bout, who was serving a 25 year sentence in the US on charges of conspiracy to sell tens of millions of dollars of weapons that would be used against Americans

Reportedly, Griner spent about 12 hours of her 18 hours of flight speaking to the other passengers and crew members, discussing her time in the Russian penal colony and her months in prison. He did not go into specific detail, but said the Phoenix Mercury player opened up on the ride home.

‘I was left with the impression this is an intelligent, passionate, compassionate, humble, interesting person, a patriotic person,’ Carstens said.

‘But above all, authentic. I hate the fact that I had to meet her in this manner, but I actually felt blessed having had a chance to get to know her.’

The WNBA is undergoing a full medical and mental evaluation, but Carstens reported that she looked ‘fantastic’ and ‘full of energy.’

Griner, who also played professional basketball in Russia, was arrested at the Moscow airport in February after Russian officials said she had been traveling with vape canisters and cannabis oil.

She was then, according to the US State Department, ‘wrongfully detained,’ a phrase that Russia rejected on its face.

Last Thursday, President Joe Biden announced that the US had secured Griner’s release in exchange for notorious Russian arms dealer Viktor Bout, who had been serving a quarter-century prison sentence for conspiring to sell many millions of dollars in weapons to be used against American citizens. Bout’s international nickname is ‘The Merchant of Death.’

Many have been critical of the Biden administration’s decision to move forward with the exchange due to Bout’s record and value as an agent of global violence against Americans.

Furthermore, the Biden administration was unable to secure the release of Paul Whelan, a former Marine who has been held in Russia on what his family and the government say are baseless espionage charges for the last four years.

Bout – also known globally as ‘The Merchant of Death’ – is seen speaking on the phone, reportedly to his family, prior to landing back in Moscow after the UAE prisoner swap

Rogers Carstens, the US’s top hostage negotiator, said Griner was chatty and ready to connect with the crew on the way home to the US. He added that he is actively concentrated on ways to get former Marine Paul Whelan home

Carstens, who called his job ‘humbling’ but ‘painful,’ said:  ‘Know this, even as we are welcoming someone home, we still have work to do. So as I am shaking Brittney’s hands and we are going to the aircraft and having this great conversation, my brain is already thinking about Paul Whelan. What can we do to get him back? What’s the next move? What is the strategy? How can we adapt?’

He described a brief conversation he had with Whelan: ‘I said, ‘Paul, you have the commitment of this President. The President’s focused, the secretary of state’s focused. I’m certainly focused, and we’re gonna bring you home.”

John Kirby, the spokesman for the National Security Council said, ‘They hold Mr. Whelan differently because of these espionage charges. So we’re working through that now.

‘We are now more informed, clearly having gone through this process over the last few months. We’re more informed. We have a better sense of the context here, where the Russia’s expectations are and we’re just going to keep working on it,’ he added.