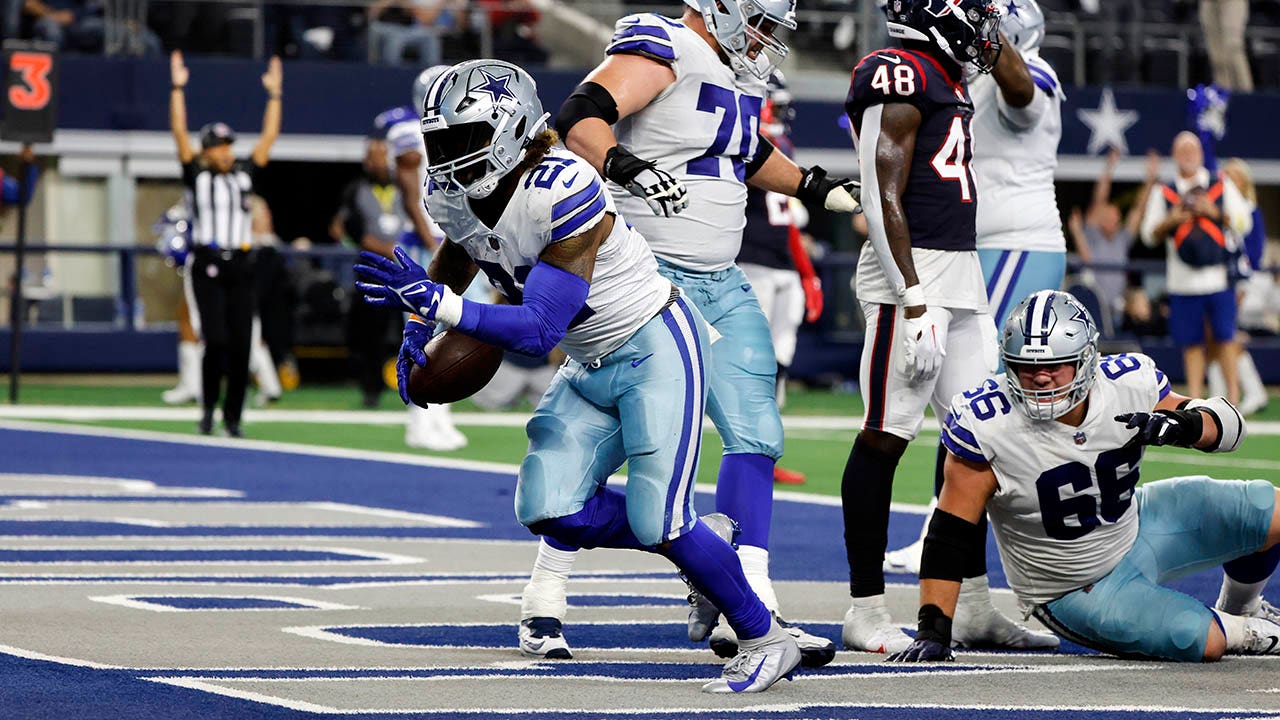 
The Dallas Cowboys needed the entirety of the game’s 60 minutes to escape Houston with a 27-23 victory over the Texans on Sunday, avoiding what may have been the biggest upset of the 2022 NFL season.

Houston was trying to put the final nail in the coffin in a potential win over Dallas after picking off Dak Prescott with just over 5 minutes to play in the game. Houston was given four downs and goal to go but failed to get into the end zone. The Cowboys got the ball with 98 yards to go.

Dallas Cowboys running back Ezekiel Elliott, left, celebrates with quarterback Dak Prescott after scoring a touchdown during the second half against the Houston Texans, Sunday, Dec. 11, 2022, in Arlington, Texas.
(AP Photo/Tony Gutierrez)

Much like what Baker Mayfield did for the Los Angeles Rams on Thursday night against the Las Vegas Raiders, Prescott led his team on an 11-play, 98-yard drive to engineer the go-ahead touchdown. Prescott thought he had a touchdown pass to Michael Gallup, but the ball was jarred by Houston safety Jonathan Owens. The Texans needed another stop to potentially force the Cowboys to kick a field goal.

However, on 3rd down, Ezekiel Elliott scored from the 2-yard line to help Dallas go up four points.

Houston’s final drive ended with a Hail Mary pass attempt from Davis Mills to the end zone that was intercepted by Cowboys safety Israel Mukuamu.

Dallas Cowboys running back Ezekiel Elliott (21) scores a touchdown during the second half against the Houston Texans, Sunday, Dec. 11, 2022, in Arlington, Texas.
(AP Photo/Michael Ainsworth)

JK DOBBINS RUSHES FOR OVER 100 YARDS WITH TD, RAVENS SKIRT BY RIVAL STEELERS

Elliott finished the game with 62 rushing yards on 15 carries and the touchdown. Running back Tony Pollard added 42 yards on 10 carries and a touchdown as well.

Prescott struggled a little bit as he threw two interceptions. He managed to have a touchdown pass to Pollard along with 284 passing yards. Dalton Schultz led the way with six catches for 87 yards and Noah Brown had four catches for 85 yards.

Chris Moore had a breakout game for the Texans with 10 catches for 124 yards. Amari Rodgers had a touchdown pass from backup quarterback Jeff Driskel and finished with four catches for 57 yards.

Dallas improved to 10-3 on the season, solidifying their second straight 10-win season. The lowly Texans fell to 1-11-1 on the year.