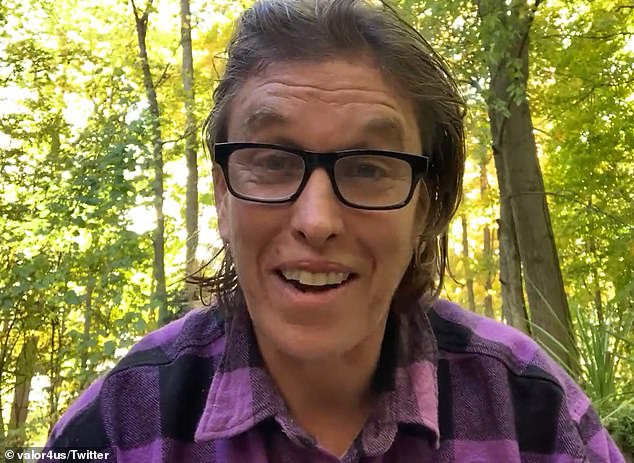 
A retired Navy SEAL who made headlines after transitioning from a man to a woman has now decided to switch back to the sex of his birth – slamming trans activists who ‘took advantage’ of him.

Kristin Beck, 55, is now detransitioning and reverting to his previous name Chris Beck – as he realized his sex change was ‘the worst mistake’ of his life after being given hormones following a one-hour consultation.

Beck had an impeccable record having served in the Navy for 20 years including SEAL Team Six – the most highly trained elite force in the US military.

He was deployed 13 times and received more than 50 medals and ribbons for his service including a Purple Heart and Bronze Star – but he is now turning his attention to the health of young people who are considering making similar choices to his own.

Kristin Beck, a former Navy SEAL who transitioned from a man, Chris Beck, to a woman and is now detransitioning, is seen speaking in a video from Beck’s Twitter page

Beck, 55, the first openly transgender Navy SEAL is now transitioning back to a man and his previous name, Chris Beck

‘Everything you see on CNN with my face, do not even believe a word of it,’ Beck told Robby Starbuck on his podcast.

‘Everything that happened to me for the last 10 years destroyed my life. I destroyed my life. I’m not a victim. I did this to myself, but I had help. I take full responsibility. I went on CNN and everything else, and that’s why I’m here right now. I’m trying to correct that.’

Beck referred to an interview he gave to CNN in June 2013 when he appeared on Anderson Cooper’s show about his transitioning to a woman.

‘I was used … I was very naive, I was in a really bad way and I got taken advantage of. I got propagandized. I got used badly by a lot of people who had knowledge way beyond me. They knew what they were doing. I didn’t,’ he said during a two hour podcast.

Beck claims that he was used by a Veterans Affairs doctor and other activists to push and ‘normalize’ what he says is the radical transgender agenda.

For 20 years, Chris Beck served in the military in various war zones

Beck, a former Navy SEAL who transitioned from a man to a woman is now detransitioning

Beck, right, it pictured with their partner, in photos from Beck’s Facebook page

‘There are thousands of gender clinics being put up over all of America,’ he said.

‘As soon as [kids] go in and say, ‘I’m a tomboy’ or ‘This makes me feel comfortable,’ and then a psychologist says, ‘Oh, you’re transgender.’ And then the next day, you’re on hormones – the same hormones they are using for medical castration for pedophiles. Now, they are giving this to healthy 13-year-olds.’

‘Does this seem right? This is why I am trying to tell America to wake up,’ he said.

Beck explained that when he started his own journey of transitioning he was given just a one hour-long consultation at Veterans Affairs before being offered hormones.

‘I had so much going wrong in my system when I started taking those. Some of that was paid for by the VA, and I’m sorry to the American people that I did that.’

He also revealed that he has not taken the hormones for around seven years.

‘This is a billion-dollar industry between psychologists, between surgeries, between hormones, between chemicals, between follow-up treatments. There are thousands of gender clinics popping up all over our country. And each of those gender clinics is going to be pulling in probably over $50 million,’ Beck surmised.

During his 2013 interview, speaking as Kristen, the former Navy SEAL said how she had to suppress her true feelings for her whole life including her two decades in the military

During his 2013 interview, speaking as Kristen, the former Navy SEAL said how she had to suppress her true feelings for her whole life including her two decades in the military.

Beck said how she didn’t know how her fellow ‘brothers in arms’ would react if she told them her true gender identity.

‘There’s a chance if they took it (badly) I may be dead today,’ she said during the broadcast. ‘It’s hard to say what the reaction would be.’

At the time, Beck said it was only in 2011 upon retiring from the military when she began living her ‘true’ life as a woman.

At the time, Beck said it was only in 2011 upon retiring from the military when she began living her ‘true’ life as a woman

Beck, seen here since her 2011 retirement, said that during time off from the military she would dress in women’s clothing in the privacy of her own home and shop for lingerie at Victoria’s Secret

She told Cooper how she started ‘peeling back the layers’ that she had built around herself that she used to keep others from realizing her true identity.

‘I always looked at it like an onion … deep down at the middle of the onion is where my female persona was hidden,’ she said.

‘Can you imagine being in a group of people where life and death is the everyday. We do it every day, and your trust and your camaraderie… there’s nothing like it,’ she said in the interview.

‘It’s definitely tough, we say it’s strength and honor and that’s still what I gave true. I gave true brotherhood and I gave 150 per cent all the time.’

During those times, she would ‘purge’ by wearing lingerie and women’s’ clothes in the privacy of her own home.

In her 2013 interview, Beck told how she would go to Victoria’s Secret and buy lingerie and pretend that it was for a fictitious girlfriend in order to avoid questions. Pictured in 2017

Beck came into the public eye after having published a book about her life as a member of SEAL Team 6 entitled Warrior Princess: A U.S. Navy SEAL’s Journey to Coming out Transgender

She told how she would go to Victoria’s Secret and buy lingerie and pretend that it was for a fictitious girlfriend in order to avoid questions.

Going shopping around big holidays like Valentine’s Day would make it even more easy because there would be more men in the store around those times.

‘You buy a lot of stuff… makes you feel more closer to how you’d like to feel,’ she said.

She came into the public eye after having published a book about her life as a member of SEAL Team 6 entitled Warrior Princess: A U.S. Navy SEAL’s Journey to Coming out Transgender.

The book details up through her coming out period and her decision to live life as a woman.

During the 2013 interview she said that the majority of the responses she had received from her former colleagues had been overwhelmingly supportive with most of the negative comments coming from strangers reacting to her book which she says that is largely out of prejudice.

Putting numbers on the explosion of children seeking gender care

The US has seen an explosion in recent years in the number of children who identify as a gender different from what they were designated at birth. Thousands of families are weighing profound choices in an emerging field of medicine as they pursue what is called gender-affirming care for their children.

The spotlight fell on trans-identifying Sunny Bryant, 8, earlier this year, when Texas lawmakers declared illegal the hormone treatments she was planning to take  upon reaching adolescence

In 2021, about 42,000 children and teens across the United States received a diagnosis of gender dysphoria, nearly triple the number in 2017, according to data Komodo Health, a technology company, compiled for Reuters. Gender dysphoria is defined as the distress caused by a discrepancy between a person’s gender identity and the one assigned to them at birth.

Overall, the analysis found that at least 121,882 children ages 6 to 17 were diagnosed with gender dysphoria from 2017 through 2021. Reuters found similar trends when it requested state-level data on diagnoses among children covered by Medicaid, the public insurance program for lower-income families.

Gender-affirming care covers a spectrum of interventions. It can entail adopting a child’s preferred name and pronouns and letting them dress in alignment with their gender identity — called social transitioning.

It can incorporate therapy or other forms of psychological treatment. And, from around the start of adolescence, it can include medical interventions such as puberty blockers, hormones and, in some cases, surgery. In all of it, the aim is to support and affirm the child’s gender identity.

These medical treatments don’t begin until the onset of puberty, typically around age 10 or 11.

But families that go the medical route venture onto uncertain ground, where science has yet to catch up with practice. While the number of gender clinics treating children in the US has grown from zero to more than 100 in the past 15 years — and waiting lists are long — strong evidence of the efficacy and possible long-term consequences of that treatment remains scant.

Puberty blockers and sex hormones do not have US Food and Drug Administration (FDA) approval for children’s gender care. No clinical trials have established their safety for such off-label use. The drugs’ long-term effects on fertility and sexual function remain unclear.

New Yorkers took to the streets of Manhattan to participate in the Reclaim Pride Coalition’s (RPC) fourth annual Queer Liberation March, which in June focussed on transgender rights among other issues

And in 2016, the FDA ordered makers of puberty blockers to add a warning about psychiatric problems to the drugs’ label after the agency received several reports of suicidal thoughts in children who were taking them.

More broadly, no large-scale studies have tracked people who received gender-related medical care as children to determine how many remained satisfied with their treatment as they aged and how many eventually regretted transitioning. The same lack of clarity holds true for the contentious issue of detransitioning, when a patient stops or reverses the transition process.

The National Institutes of Health, the US government agency responsible for medical and public health research, told Reuters that ‘the evidence is limited on whether these treatments pose short- or long-term health risks for transgender and other gender-diverse adolescents.’

The NIH has funded a comprehensive study to examine mental health and other outcomes for about 400 transgender youths treated at four US children’s hospitals. However, long-term results are years away and may not address concerns such as fertility or cognitive development.