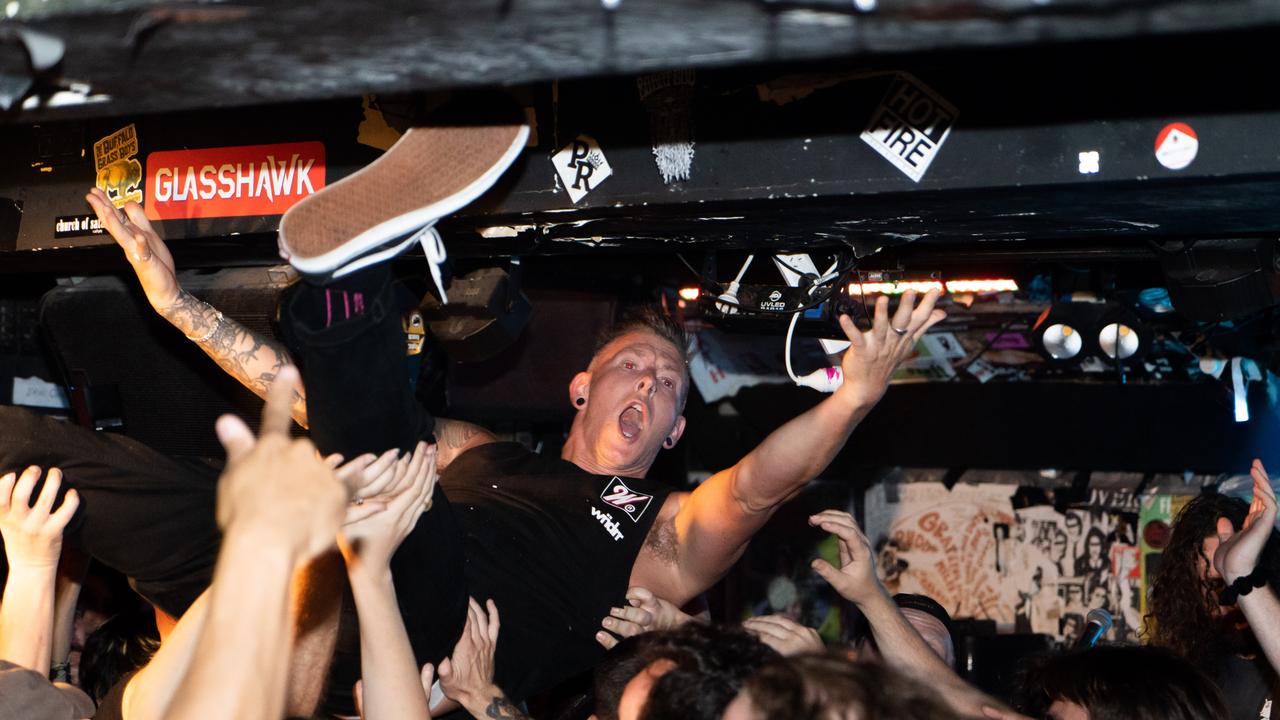 
An iconic Sydney rock’n’roll venue has thrown its final farewell over the weekend, with thousands queuing for hours to catch one last glimpse of the revelry.

Frankie’s Pizza farewelled 10 years as a staple of Sydney’s live music night-life on Sunday night and fans flocked from all over the city to get in.

The venue is being forced to close its doors to make way for a new metro project that will connect the CBD with the western suburbs.

A queue began to crawl up Hunter St by about 2pm, and by the time doors opened two hours later, the line had wrapped around the block and wouldn’t budge for hours.

For passers-by, the scene may have looked like stepping back into another era, but for regulars of Frankie’s, it was just like any other night at the beloved venue.

Metalheads, punks, goths – the full spectrum of the alternative music scene – turned out for a line-up of raucous rock’n’roll.

Greasy pink hair slick with sweat, platform leather boots laced up to the thigh and a uniform of jet black cut-off vests, fishnets and band T-shirts were just a slice of the action.

A line-up boasting the best of local rock talent – many of whom cut their teeth at this very venue – took to the velvet-clad stage.

At some point early in the evening a man got down on bended knee and proposed to his girlfriend in front of the crowd.

Patrons clambered into the main room as Redhook opened the stage at 5pm, followed by Melbourne punks Wolfpack and then death metal band Flaming Wrekage.

People climbed over the rounded diner-style booths, standing over the crowd to get a better view as the roar of the lead singer thundered through the room.

A ‘death pit’ soon formed in the front rows as bodies smashed into each other in time with the wall of sound.

Heads were thrown back as people screamed into the night.

Among the crowd, rockers embraced with one another – looking like they had been plucked straight out of another decade.

Headphones and earplugs were worn by young and old as the night dragged on and the volume tipped louder and louder.

There is a palpable sense of community in a venue like Frankie’s, where people point each other out in a crowd and shake hands.

A clear mood of mourning was in the air, as thousands of Sydneysiders who still want a place to celebrate live music reflected on what feels like a place of worship.

Just after 8pm the police make an appearance, wading through the crowds before exiting.

The crowds were swollen and the head banging was wild, but concerns for safety are near non-existent in this venue.

Even as the death pit roars, some of the rockers perched on the booths are scanning the crowd for anyone who might need a hand.

A Motorhead tribute band – Lemmy Lager Party Band – were next to the stage and turned the dial up on the volume.

The crowd heaved and heads were banging as the lead singer called on those who were “born to raise hell”.

The line still wrapped around the block at 9.30pm, so Frankie’s staff sent out boxes of fresh wood-fired pizza for those hunkering down.

Videos posted to social media suggest the party raged on well into Monday morning, with some saying they did not emerge into daylight until 8am.