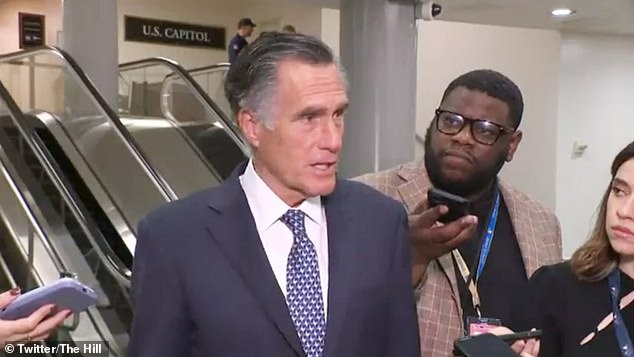 Speaking with reporters about the defeat of Herschel Walker in Georgia’s senate runoff, Romney blamed Trump’s endorsement of Walker for the defeat and labeled the former president a ‘death knell’ for other Republican hopefuls.

Walker is the latest in a slew of candidates endorsed by Trump who suffered embarrassing defeats in this year’s midterms – after Arizona’s Kari Lake and Pennsylvania’s Dr Oz also flopped in the polls.

Romney, a Republican senator from Utah long-known for his outspoken criticisms of Trump, is just the most recent Republican to blame Trump for the party’s disappointing midterm results.

Though Romney has long been known for his criticism of Trump, many other Republicans besides him have fingered Trump for the party’s midterm results

‘Well, President Trump lost again. And I know a lot of people in the party love the president, the former president.

‘But he’s – if you will – the kiss of death for someone who wants to win a general election.’

‘And at some point, we’ve got to move on and look for new leaders that will lead us to win.’

Romney noted that those leaders would likely be running for ideas that Trump agreed with, but that if the former president wanted to see those ideas come to fruition he needed to stay out of it.

‘And be able to get an agenda, that frankly President Trump would find an attractive agenda, and have that agenda be successful.’

Walker, a Heisman Trophy-winning Georgia football star who went on to play for the NFL, is the latest in a slew of candidates endorsed by the former president who suffered embarrassing defeats in this year’s midterms

Despite Donald Trumps prominent backing of Dr. Mehmet Oz, he was defeated in Pennsylvania’s senatorial race

The race concluded a devastating midterm season for the GOP, with the predicted ‘red wave’ failing to materialize.

‘OUR COUNTRY IS IN BIG TROUBLE. WHAT A MESS!’ he wrote.

Walker was handpicked by Trump to run against Raphael Warnock in a state where Republican Gov. Brian Kemp easily won reelection over a national Democratic figure, Stacey Abrams.

Though Walker’s campaign was harried by a slew of allegations of domestic abuse and coerced abortions, Romney was not the only Republican to finger Trump for the candidate’s downfall.

‘Georgia may be remembered as the state that broke Trump once and for all,’ former George W. Bush aide Scott Jennings wrote on Twitter Tuesday night.

With Democratic Sen. Raphael Warnock’s Tuesday night win, the Democrats have a true majority in the Senate 51 to 49

The runoff race marked the last Senate race of the 2022 cycle and awarded Georgia Sen. Raphael Warnock with a full six-year term

Former Trump administration official John Bolton echoed similar sentiments on Wednesday morning: ‘The outcome in Georgia is due primarily to Trump, who cast a long shadow over this race.’

‘His meddling and insistence that the 2020 election was stolen will deliver more losses. Trump remains a huge liability and the Democrat’s best asset. It’s time to disavow him and move on,’ Bolton said.

Trump infamously lost the Peach State to President Joe Biden by less than one point.

His subsequent claims of election fraud were blamed for deflating Republican voter turnout in the state’s two Senate runoff elections in January 2021 – two seats that were critical for Democrats to reclaim the majority.

And his attempted primary takedown of Kemp, who Trump targeted for asserting the state’s 2020 election was fair, similarly sputtered earlier this year.

‘Trump has now lost 4 races in Georgia in two years. One of his own and 3 by proxy. Similar stories in [Arizona] and [Pennsylvania],’ former Trump Chief of Staff Mick Mulvaney said on Wednesday morning.

Some have said the ex-president is not a good judge of candidate quality – which Republican operatives also seem to hold him responsible for.

There’s now ‘a whole lot of pissed off Georgia Republicans,’ he said.

The Democrats have won a true majority in the Senate after Warnock beat Walker.