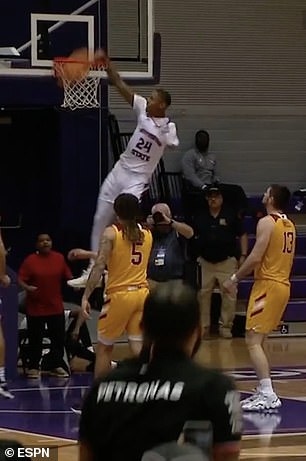 Northwestern State freshman, 19, scores five points for college’s basketball team despite only having one arm after losing limb to childhood accident

By Alastair Talbot For Dailymail.Com

A Northwestern State freshman in Louisiana came off the bench to score his first competitive college basketball points – despite only playing with one arm after losing it in a childhood accident.

Hansel Emmanuel, 19, weaved in from the right to score his first bucket – a stylish layup – with less than three minutes to go in the second half of his team’s 91-73 win over Louisiana-Monroe on Saturday night.

Mostly everyone among a crowd of 1,627 people at Prather Coliseum stood up to acknowledge the iconic moment. A minute later, the 6-foot-6 guard provided the most defining moment of the game — a thunderous dunk — to increase his tally to four points before adding a fifth after making a free throw.

‘I had to keep going after the layup – that was my first bucket,’ Emmanuel said in a quote posted on the Southland Conference school’s website. ‘I know my family was proud. I had to keep working. You can’t give up.’

Hansel Emmanuel, 19, came off the bench for Northwestern State to score his first competitive college basketball points in a 91-72 win over Louisiana-Monroe on Saturday night, despite only playing with one arm after losing it in a childhood accident

Emmanuel, whose of Dominican descent, was just six years old when a pile of cinderblocks fell on him. The damage was so severe, doctors had to amputate most of his left arm

The first-year student, who lost his left arm just below his shoulder, was two-of-three from the field and one-of-five from the foul line, along with two rebounds in eight minutes.

Emmanuel had played in four previous games for the Demons this season, but only had one rebound to his name after missing two shots.

Born in the Dominican Republic, the freshman was just six years old when a pile of cinderblocks fell on him. The damage was so severe, doctors had to amputate his arm.

Despite his life-altering injuries, Emmanuel said that he saw the experience as a ‘blessing.’ He was eventually forced to give up his preferred sport of baseball, before picking up basketball.

The college freshman said he saw his life-changing injury as a ‘blessing’ and had to give up his preferred sport of baseball, before picking up basketball

His father, an ex-professional basketball player himself, wasn’t keen on the idea, fearing that his son would get hurt.

Emmanuel later moved to Florida on a scholarship after posting videos on social media of him playing streetball in his hometown of Santo Domingo. He became a big scorer in high school and was rated as a three-star recruit by 247Sports.

Emmanuel drew interest from Memphis, among other colleges before committing to Northwestern State in July. He had also considered playing in the Overtime Elite professional league.

Emmanuel became an internet sensation during his high school days, and had offer from top ranked college basketball programs, including Memphis, before committing to Northwestern State in July

‘That was a great game for us,’ Emmanuel later said in a postgame interview after Saturday’s win. ‘Everyone was hitting shots. The bench was great. The energy was great. We play hard. That’s our team – the Demons.’

Emmanuel’s nickname – ‘Kikimita’ – was passed down from his father, who was called ‘Kikima’ in his playing days.

The college freshman cites LeBron James and Kevin Durant as his idols.