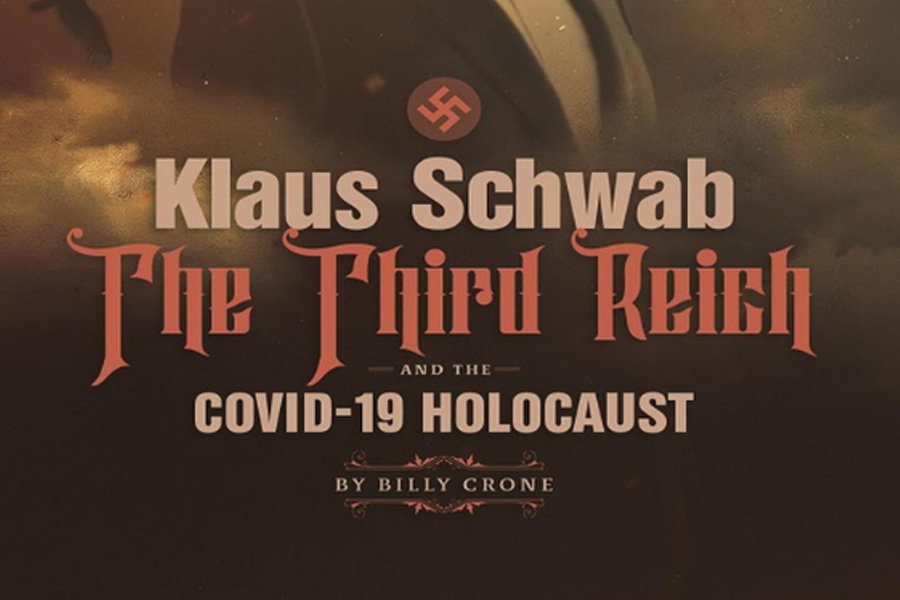 
PORTSMOUTH, OH –  One word to describe what’s in Crone’s nonfictional book – unnerving. “Who would have thought, in a relatively short amount of time, that history would be repeating itself with the rise of another even larger Hitlerian Regime on the planet?”

Folks, from a Judeo Christian perspective, the parallels of Klaus Schwab to Adolf Hitler makes sense –scary sense. And as we are living in the last days before the return of Jesus Christ, Schwab will be the last Hitler. That makes Schwab an instrument of Satan.

Review: Klaus Schwab, the founder of the World Economic Forum, is the wanna-be dictator working towards a global empire. “You’ll own nothing and be happy,” is his slogan.

What is Schwab’s Great Reset? Victor Davis Explains. Watch a clip on YouTube.

According to Fox News, in a recent interview with Chinese state-affiliated media during APEC CEO Summit in Bangkok, Schwab says he sees the Chinese system as a “role model” for other nations.

What? Read that again. Schwab is singing the praises of communist China.

Back to Crone’s book. Watch the trailer on his website or below.

Watch Billy Crone being interviewed on Tipping Point with Jimmy Evans: The Shocking Truth of the World Economic Forum on YouTube.

In ten chapters and 301 pages, Crone lays out the dastardly deeps of the supervillains seeking to rule the planet. Sounds like a sci-fi Marvel movie – but it’s Satan’s evil agenda to counterfeit almighty God. Lucifer (Satan’s name before he became a fallen angel by challenging God) has worked tirelessly since being kicked out of Heaven.

The last chapter is called Klaus Schwab & His Defeat by God. That’s the good news. Read the book of Revelation in the Bible. God wins – Satan loses. And God’s people live in peace forever with Lord Jesus after the Tribulation.

Why isn’t the Joe Biden administration, Congress, and the military sounding the alarm about Schwab’s impending totalitarian takeover? Because the Deep State regime (radical Democrats, liberals, leftists, mainstream media) is on Schwab’s team of tyrants (i.e., King Charles, George Soros, Justin Trudeau, Bill Gates, Yuval Noah Harari, Henry Kissinger, wealthy and powerful family dynasties, United Nations, World Health Organization, central banks, corporations) and the leaders of communist countries. For the last fifty years, Schwab has been planning, grooming, recruiting, and brainwashing his soldiers using a false agenda of a utopian planet for all. And the megalomaniacs at the top of the pyramid own everything and the peasants own nothing.

You can find info about the life and mission of Pastor Billy Crone at www.getalifemedia.com.

Crone’s other books include:

Satan’s Plan for the USA

In 2020, the election was stolen by the Deep State cabal (aka the New World Order via Schwab at the World Economic Forum) and freedom was taken hostage by the treasonous rats in the White House, Congress, FBI, DOJ, and in courts across our nation. We’ve witnessed the following from Team Biden’s thirst for power and control: the deadly COVID vaccine, censorship, sky-high inflation, the planned J6 incident by the FBI and DOJ, gun control, BLM scandal for trying to start a race war, Ukraine war, gobbling farmland to decrease food supplies, planned energy crisis, the transgender cult movement, pushing gender ideology and Critical Race hokum in schools, climate crisis hoax, open borders, the Federal Reserve’s push for digital dollars and central banking, IRS thugs legislation, stolen midterm, and the list goes on and on.

“This is The Satanic War on the Christian and it’s been raging on for the last 6,000 years. But many Churches refuse to talk about this conflict let alone equip others who are in the midst of it.” –Billy Crone

In 2016, God allowed Donald Trump to win the presidential election. Why? God heard the cries and prayers of His people in the USA – and God answered. For 4 years, our land of liberty prospered with freedom of religion and economic abundance. God blessed Israel through the deeds and resolutions by President Trump, a supporter of the Jewish people.

But look at what God is exposing: Twittergate, corruption in the FBI and DOJ, deception through Hunter Biden’s laptop, the treasonous deeds of the Deep State regime to destroy the U.S. Constitution and Bill of Rights, and on and on.

Moreover, Donald Trump recently announced his candidacy for 2024 and his loyal supporters are celebrating. The corrupt voting system of the radical Democrats was further exposed via Kari Lake’s stolen midterm election – and the truth will prevail – because God is on the side of truth.

Folks, take heart because God’s covenant with the USA will prevail until the Rapture occurs. Speak out for salvation through Jesus. Read the Bible and pray daily. Unite for truth, freedom, and liberty.

I highly recommend Crone’s book: “Klaus Schwab – the Third Reich & the Covid 19 Holocaust” and his other books as well.