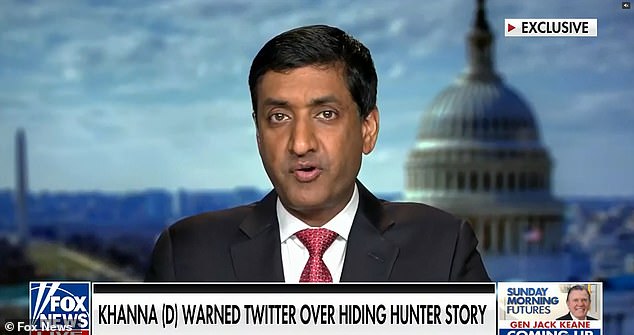 
Ro Khanna, perhaps the only Democratic lawmaker to speak out about the suppression of the Hunter Biden laptop story, said Sunday that he’s open to congressional investigations into the matter.

The California Democrat, it was revealed in the ‘Twitter Files’ earlier this month, reached out to the social media giant to tell them their censorship of the New York Post story about Joe Biden‘s son in October 2020 was a ‘violation of the First Amendment.’

‘Look, The New York Post hasn’t written a kind thing about me in my six years in Congress,’ Khanna told Fox News Sunday Morning Futures host Maria Bartiromo. ‘They’re a conservative-point-of-view paper. But that doesn’t mean that you can stop publishing their pieces or articles or censor their journalists from sharing stories.’

‘It just offended the basic principles that our country is based off,’ he said of the censorship call by Twitter.

The so-called Twitter Files reveal a slew of internal communications at Twitter surrounding the decision to suppress the Hunter Biden laptop story as well as the decision to boot then-President Donald Trump from the platform in the days after the January 6 Capitol attack.

Democratic Rep. Ro Khanna, who sits on the Oversight Committee, said he is ‘open to hearings in Congress’ regarding Twitter’s suppression of the Hunter Biden laptop story

The internal correspondence shows Khanna reached out to Vijaya Gadde, who was head of legal, policy, and trust at Twitter at the time, to question why the Post story had been wiped from the platform.

He explained to Gadde that journalists and media outlets should not be held responsible for illegal actions of sources unless the publisher also aided in the illegal activity. He also said that the press should feel emboldened to publish stories, ‘especially regarding a Presidential candidate.’

Khanna, rightfully, speculated that the story was now more about the censorship and brought into question more concerns over why there was such a large effort to suppress the report in the first place.

‘I have said I’m open to hearings in Congress on this,’ Khanna told Fox News.

Khanna, according to the ‘Twitter Files’, reached out to the social media company to express concern over freedom of speech after they suppressed the story about the contents of Hunter Biden’s laptop

Vijaya Gadde, who was head of legal, policy, and trust at Twitter at the time, responded to explain the move

Khanna, a Democrat, responded by saying it was a ‘violation of the 1st Amendment’ to ‘restrict distribution’ of a story

He insisted that reaching out to Twitter wasn’t ‘exceptional’, because he was ‘just standing up for our Constitution and for our First Amendment.

Khanna is a member of the House Oversight and Reform Committee and the House Armed Services Committee. He wrote a recent Wall Street Journal op/ed where he wrote: ‘Censorship of the Hunter Biden story might have helped my party, but it was bad for our democracy.’

The Democratic lawmaker, who didn’t mince words about his feelings toward right-leaning publications like the Post, said just because someone disagrees with something, doesn’t mean it can ‘just be silence.’

‘Let me tell you, that’s just going to create further polarization, further alienation,’ Khanna said. ‘And I have been surprised how many Republicans, who don’t agree with a single thing I said, believe, OK, at least we can have a dialogue. And that, I think, is the first step to being together as Americans.’

‘We can all pledge allegiance to the Constitution, to the First Amendment,’ he added. ‘That’s what makes us Americans.’

Republicans took a majority in the House in the 2022 midterm elections last month, and the new Congress will be sworn in next month.

GOP leaders and members of key committees have pledged to open investigations into the Hunter Biden laptop scandal, including its suppression on Twitter and Facebook