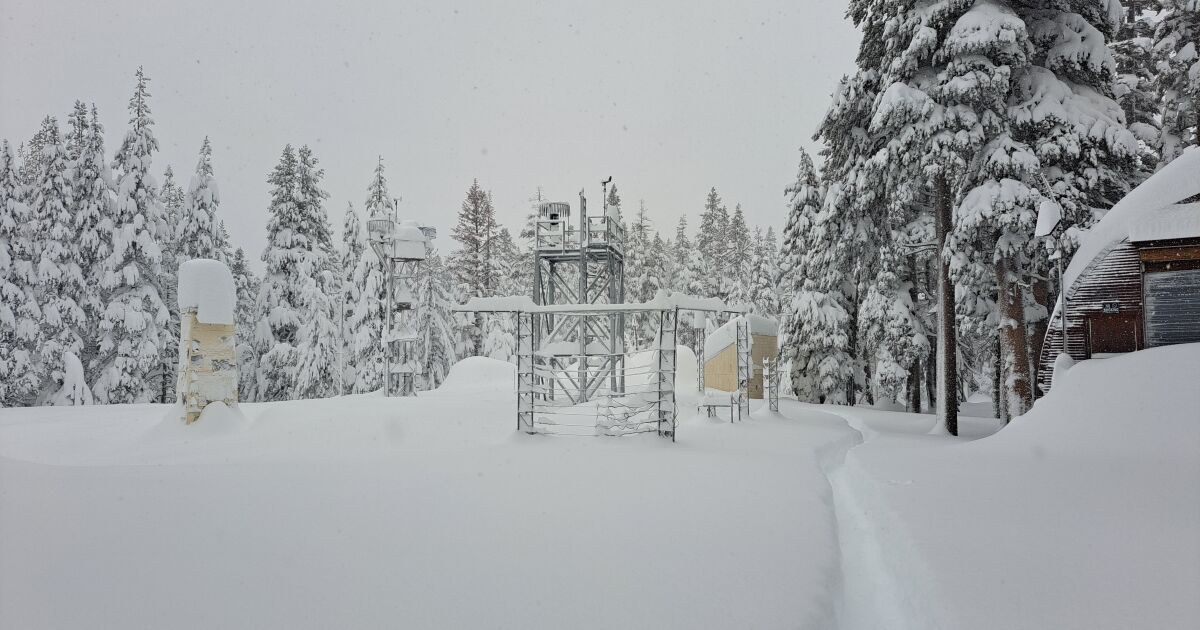 A winter storm blanketed the Sierra Nevada in heavy snow and soaked much of California with rain, bringing a wet start of winter after three years of record drought.

The storm laid down 3 to 4 feet of fresh snow in parts of the Sierra Nevada over the weekend.

From the San Francisco Bay Area to Southern California, between 1 inch and 4 inches of rain fell in many areas. Some parts of the hills and mountains received up to 7 inches of rain over two days, sending water rushing in creeks.

The amount of rainfall varied widely across Southern California. Less than an inch of rain fell in downtown Los Angeles, while Pasadena recorded about 3.5 inches and Burbank saw 1.2 inches, according to the National Weather Service. More than 5 inches of rain fell in parts of Ventura and Santa Barbara counties.

The storm brought a welcome boost to the state’s severely depleted water supplies. The last three years have been California’s driest on record, and the state’s reservoirs remain far below average levels.

Meteorologists and climate scientists said although the storm brought a bit of much-needed relief, it’s much too early to know whether this winter will begin to ease the drought.

“This is a great start to the winter, but it’s unlikely that it will impact the drought,” said Andrew Schwartz, lead scientist and manager of UC Berkeley’s Central Sierra Snow Laboratory. “If we get to March or April and we’re above average, then we can start to talk about impacts to the drought.”

Last December, a record-breaking 17 feet 10 inches of snow fell at the snow lab, but then the snow stopped, and the next three months were extremely dry.

The latest storm arrived over the weekend with strong, gusty winds and brought the biggest snowfall so far this winter.

The snow lab, in Soda Springs northwest of Lake Tahoe, recorded more than 3 and a half feet of snow over two days. Some other areas at ski resorts measured 4 feet.

The blizzard reached its peak Saturday, with as much as 5 inches of snow falling per hour.

In Truckee, scientist Neil Lareau awoke Sunday to see that about 15 inches of snow had come down on his deck overnight, burying a yardstick that he uses as a gauge. The accumulated snow was about 4 feet deep, transforming the landscape.

Lareau, an assistant professor of atmospheric science at the University of Nevada, Reno, had hoped to go to one of the local ski areas but said many of them were temporarily closed because of avalanche concerns and difficulties dealing with the snow. Instead, Lareau planned to head outside to play in the snow with his children.

California typically gets most of its precipitation between October and April, when storms sweep in from the Pacific with rain and snow.

“It’s always remarkable when we get these big storm cycles,” Lareau said. “We have this kind of boom or bust climate in the Sierra, where a tremendous amount of our water resources come in, in just a handful of storm systems every year. And this is one of those.”

Last week, the snowpack across the Sierra Nevada measured 156% of average for this time of year, and the storm pushed the snow totals higher.

“It’s a great boost to our water resources in the near term and, and hope that trend continues through the winter,” Lareau said. “But the spigot can turn off just like it did last year, and we’ll be right back in the same spot.”

State water officials have said they are taking a cautious approach in case next year ends up being a fourth dry year. The Department of Water Resources announced this month that water agencies should prepare to get by with as little as 5% of their full allocations from the State Water Project, which transports water through aqueducts from the Sacramento-San Joaquin River Delta to farmlands and cities to the south.

The Colorado River, another major water source for Southern California, is in a severe shortage after 23 years of extreme drought compounded by the effects of global heating. And managers of Southern California water districts have been discussing plans for substantial cutbacks next year, which are expected to bring new drought restrictions in cities as well as water reductions in farming areas.

The rain and snow are expected to pass by Monday, giving way to drier weather.

Forecasters with the National Weather Service have said that with a La Niña pattern in the Pacific expected to persist through a third consecutive winter, the next few months could bring below-average precipitation in much of California and the Southwest.

“It’s somewhat of a weak La Niña, so it may not directly correlate to drier than normal weather,” said Joe Sirard, a National Weather Service meteorologist in Oxnard.

“The severe dryness across California can’t last forever,” Sirard said. “Hopefully this will be a start of a wet pattern this winter. We’ll see.”

After the rains, people shared videos of swollen, muddy rivers in places across the state, from the Salinas River near Paso Robles to the San Lorenzo River in the Santa Cruz Mountains.

The extreme drought over the last three years has taken a major toll on ecosystems, shrinking the flows in streams and leaving warmer waters, which threaten endangered salmon and other fish.

Pablo Ortiz Partida said he felt happy seeing the rain while driving the wet streets in the San Joaquin Valley.

“These rains were most welcome, and on a personal level, they warm my heart,” said Ortiz, a senior climate and water scientist for the Union of Concerned Scientists.

“Basically, these rains put us on track for average precipitation for this time of the year. There is, of course, a long way to recover from the previous years of drought,” Ortiz said.

He said it’s important to remember that climate change, in addition to intensifying the current drought for years, has also brought extreme heat over the last year that left the soils and vegetation parched. This heat-driven drying, he said, has meant that when the snow and rain come, more is absorbed into the dry land, and “we often don’t see much of that water going into our streams, rivers, lakes and reservoirs.”

Although the latest rain and snow help, the state will need much more, Ortiz said.

In addition to the low levels of California’s reservoirs, the drought has led farmers to rely more heavily on pumping groundwater in the Central Valley, worsening long-term declines in water levels.

This year, a record number of dry household wells have been reported to the state. Many of the nearly 1,400 wells dried up in farming areas in the Central Valley. Residents have been left relying on bottled water and deliveries from trucks to fill household tanks while they wait for solutions, such a new well or a connection to pipes from a nearby community.

“For me, the drought in California will end when we stop seeing wells in communities and private wells going dry,” Ortiz said.