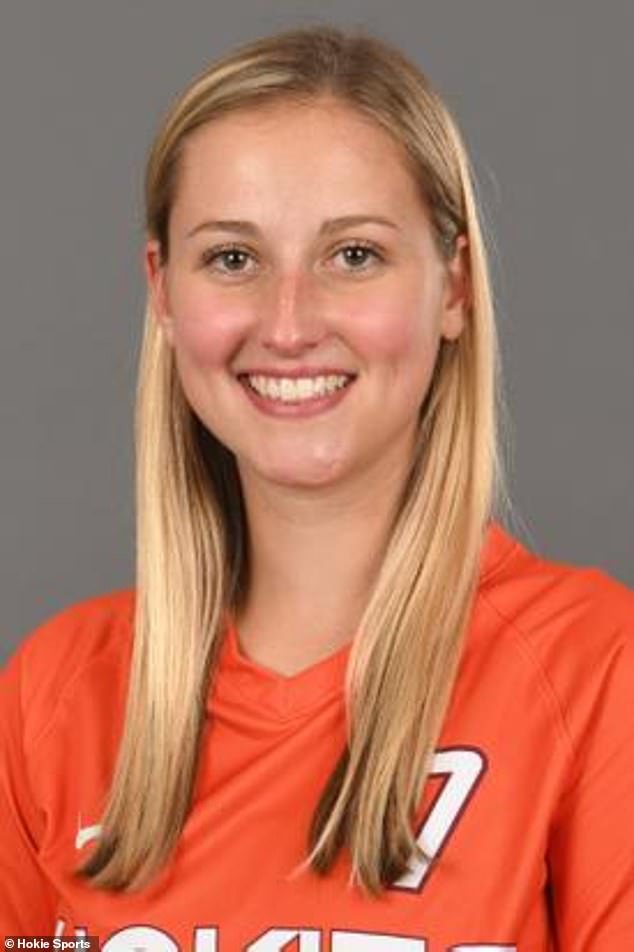 
A former Virginia Tech women’s soccer player can officially sue the school’s coach for benching her after she refused to take a knee during a social justice protest, a federal judge has ruled.

Thomas Cullen, a judge for the Western District of Virginia, ruled on December 2 that Coach Charles ‘Chugger’ Adair may have violated Kiersten Hening’s First Amendment rights for refusing to engage in the protest during the height of the Black Lives Matter movement.

He said he is therefore allowing Hening’s lawsuit arguing that Adair penalized her for her political beliefs to continue to trial.

Hening — who was once a powerful midfielder and defender for the Hokies — had alleged in her lawsuit last year that Adair ‘verbally attacked’ her after she refused to take a knee during the reading of a ‘unity statement,’ before drastically reducing the amount of time she played each game.

Her treatment on the field ultimately became so bad, she argued, that she felt compelled to quit the team.

Hening explained in her federal lawsuit last year that her status on the team began to suffer during her junior year in college in September 2020.

She and a few other students started off the season continuing to stand while the Atlantic Coast Conference’s ‘unity statement’ in response to the death of George Floyd was read over loudspeaker at the school’s home opener against the University of Virginia.

‘All starters, including Hening, were standing on the field at the time,’ the lawsuit reads. ‘While other starters knelt during the unity statement to mirror [former San Francisco 49ers quarterback Colin Kaepernick’s 2016 protests] and express support for [the Black Lives Matter movement], Hening remained standing.’

She claims Adair responded with open hostility at halftime, targeting her, instead of the other players who remained standing, because she was not a scholarship athlete.

‘At the next opportunity — halftime of the Virginia game — Coach Adair berated Hening for her stance,’ the lawsuit continues. ‘He singled her out and verbally attacked her, pointing a finger directly in her face.

‘He denounced Hening for ”b****ing and moaning,” for being selfish and individualistic, and for ”doing her own thing.”

‘Coach Adair’s tirade was so extreme, so personally directed at Hening, and so disconnected from the game itself, that her teammates approached her afterward to comfort her and express their shock.’

As Hening explains in the court documents, while she ‘supports social justice and believes black lives matter,’ she does not support ‘BLM the organization,’ citing its ‘tactics and core tenets of its mission statement including defunding the police.’

That opposition to the movement had previously surfaced in a series of private social media exchanges with teammates.

‘Someone took a screenshot of some of these private messages between girls on the team and shared them with the coaching staff,’ the lawsuit reads. ‘Some of Hening’s teammates also saw the messages and became outraged.’

Players on the team allegedly called on Adair in September of 2020 to demand that he address Hening’s comments on social media.

Following the Virginia game, Hening lost her starting role, prompting her to quit the team entirely.

‘Coach Adair’s campaign of abuse and retaliation made conditions for Hening so intolerable that she felt compelled to resign,’ the lawsuit reads. ‘Hening did not want to leave.’

‘As a result of her coach’s actions, Hening can no longer play the game she loves, despite having two more years of NCAA eligibility,’ it continues. ‘This Court should vindicate Hening’s constitutional rights and award her legal and equitable relief.’

In addition to unspecified financial rewards for compensatory, punitive and nominal damages, as well as lawyer fees, Hening is also seeking a ruling ordering Adair to ‘undergo First Amendment training.’

Adair had tried to get Cullen to dismiss the lawsuit, arguing that he did not penalize other student-athletes who stood during the unity statement

Adair had tried to get Cullen to dismiss the lawsuit, arguing that he did not penalize other student-athletes who stood during the unity statement, the New York Post reports.

But Cullen ultimately ruled that there was sufficient evidence to support Hening’s argument that she was singled out for her political beliefs —noting that she had averaged 76 minutes playing in each game as a freshman and nearly 88 minutes each game as a sophomore.

At the game following the protest, however, Hening only played 29 minutes and in the third game of the season, she only played for five minutes.

‘Ultimately, Adair may convince a jury that this coaching decision was based solely on Hening’s poor play during the UVA game, but the court, viewing the evidence in the light most favorable to Hening, cannot reach that conclusion as a matter of law,’ Cullen wrote.

‘While the US Supreme Court and the Fourth Circuit may not have addressed the novel factual circumstances presented here — i.e. a college coach allegedly retaliating against a player for refusing to kneel with her coaches and teammates in support of perceived unity and social justice — the core Constitutional principle is both clearly established and fundamental to a free society, and especially to an institute of higher education.’